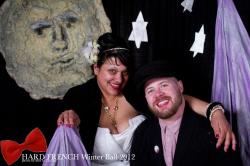 It’s time once again to nominate your friends, lovers, crushes, and all-around heros for the Hard French Winter Ball King & Queen competition!  As always, we’re looking for extraordinary folks from our community who are smart, sweet, artsy, crafty, committed, bold, big-hearted, and of course, self-identifiably sexy and know how to shake their tail feathers!  Ultimately, it’s a chance to honor the folks who tend to put in more than they get back, to say thank you for being part of what makes our community so great!

New this year, our nominees will each be competing for an organization of their choice to become the community beneficiaries of the Winter Ball (it’s sort of like Celebrity Apprentice but without Donald Trump) — it’s another way of supporting the work these great folks are doing and giving back to our community!  Of course, all finalists receive FREE entry to the Winter Ball.  The winners will receive a 2013 Season Pass to Hard French, as well as a prize pack including gift certificates and treats to some of our favorite spots (we’re constantly updating this list!!!):

The nomination form and official rules are below / after the jump — and don’t forget to get your tickets now!

Nominations are now closed!  Thank you for submitting!!!

There was an error retrieving images from Instagram. An attempt will be remade in a few minutes.