As your official Coronation Certification Specialist, let me just say, this is the cream of the crop y’all!  Almost 300 people submitted nominations to for our little shindig, and even this jaded queen got a little teary-eyed reading about all these fabulous people who are working by, for, and about our community!  Don’t forget that you must be at the ball to vote, so get your tickets now before they sell out (for realsies, I’m dead serious).

I also just wanted to give a little PSA about what’s at stake here.  In addition to love, fortune, and fame, your king and queen will win: a HARD FRENCH SEASON PASS; gift certificates to restaurants including Emmy’s Spaghetti Shack, Saturn Cafe, and Boogaloos; a Noise Pop schwag pack, including 2 tickets to Big Freedia on February 25; free drinks at El Rio, Q-Bar and Thee Parkside; haircuts at Population; massages with Andy Blum at Kabuki Springs & Spa; donuts from Dynamo Donuts!  So when I say it’s serious, I mean, it’s SERIOUS.

Anyway, without further ado, I present to you your 2012 Hard French Winter Ball court – all written up like a Zagat guidebook, darlings, for your reading pleasure.

Not gonna lie, Dashiell is an all-around sweetie.  According to one nominator, Dashiell “is probably the coolest and the happiest person I know and brings a smile to my face every time I see him.”  Wow!  Another asks, “Have you ever known someone who believes in you more than you believe in yourself?”  Aww.  Yet another describes Dashiell as a reminder “that chivalry is alive and well” – we could all use a little of that, huh?  But most importantly, Dashiell’s got moves – one nominator writes, “He has moves like Jagger.”  (Apparently that is a reference to a song the kids like, which I only know from Glee.)  Another suggests, “When choosing the king of a really rad dance party, the two most important things you have to factor in are moves and style.  Dashiell is dominant in both of these categories!!!!”  To sum up Dashiell, another writes: “Dashiell is dapper, chivalrous, charming, and kind.”  A winning combination if you ask me. 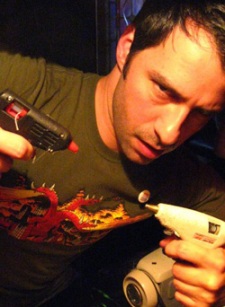 If there’s one word to describe Evan Bee it’s “Creative, creative, creative.”  This “warm and glowing ember of love” is also known as Haute Gloo, queer San Francisco’s number one promoter of arts and crafts who makes “beautiful tiaras for all the queens” and is beloved for bringing a “dazzling smile” (or “sparkling smile,” depending on who you ask) and a new project to Some Thing each week.  If there’s another word to describe Monsieur Bee it’s “Generous, generous, generous.”  Seriously, he is over and again described as a “warm-hearted” individual who “gives tirelessly” and “makes every event special because of his generosity of spirit, creativity, and passion for what he does.”  Couldn’t have said it better myself.  And of course, he’s also known to be “thoughtful, genuine, and patient,” and of course, “sexy, ridiculous, and ridiculously sexy.”  In the words of another nomination, “Duh!”
.

OK, let’s get it out of the way.  Basically all of Jackson’s nominators include one or more of the following key words: “cute,” “handsome,” “hot,” “sexy.” Well there you have it, folks!  I was also told that “he will do something embarrassingly cute on stage if pressed,” so believe me, honey, I will press!  But most importantly, beneath all that lies a “fierce and dedicated heart of gold.”  According to one nominator, Jackson “goes out of his way to support all causes gay” and according to another, “he always puts accountability to SF’s young people, bent-forwardness, and tough love before his own career.” He’s “selfless with his time and energy,” works with marginalized young people living with or at risk for HIV, and as many pointed out, “helped bring Lyon Martin back to life.”  In the words of one nominator, “Jackson is here showing us what queer family means,” so let’s show him a little love in return!
. 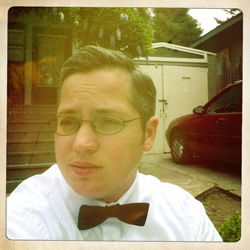 It seems like the two words most frequently used to describe Paul are “inspiration” and “tireless,” and frankly, I really don’t know how he gets any sleep!  According to one nominator, “He does more in a day for the community than most people do in a week” and according to another “Paul is a tireless crusader for at least 20 things I believe in.”  Seriously, the list is enormous and includes leadership and volunteering in various capacities at the Pacific Center, Transgender Law Center, GLBT History Museum, and too many hot lines, support groups, and fundraisers to mention, in addition to working both a day job and nightjob!  As another friend comments, “His head and heart are always in the right place,” which sounds pretty spot on to me.  Finally, and this was originally in all-caps (which I just couldn’t allow),  “He deserves a giant pat on the mother-fucking back for all his hard work and dedication” – what better way to do that than to make him our Hard French Winter Ball king?
. 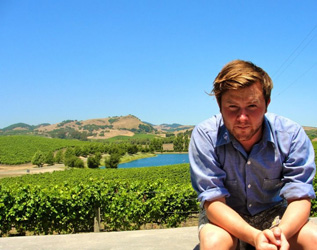 Get ready to meet someone who is frequently referred to as “San Francisco’s finest,” an “old heart,” and “a true gem.”  Though a lot of his nominations talk about his good looks (we’ll get to that in a moment), just about everyone describes him as “sweet as pie” and one nominator even uses the word “moxie” (which I admittedly had to look up, despite having an incredible vocabulary… for a drag queen). William is the only contestant to have elementary school friends nominate him (!), and according to one of these old friends, he always “lights up the room with love.”  And now for the dirty: William is described as “gregariously delicious” and one nominator comments, “The only thing more beautiful than his ass is his soul.  Sort of.”  Of his dancing, another writes, “William’s lust for life is best exemplified through his dance moves – oftentimes he returns home with bruises on his inner thighs. Yes… inner thighs.  Jealous.”  Indeed. 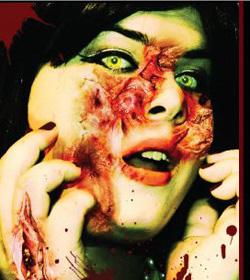 Anyone who knows her knows that Black Dahlia Parton is a true hero to the trans community and beyond.  She’s described as “humble, yet brilliant,” has “great energy and intention,” and she’d “fight for you in a tough situation.”  Sounds like someone you want on your side, no?  And she’s not afraid to share her story—as one person writes, “Even while homeless and unemployed herself last year, she still made time to organize, write, and be extremely active in the trans community.”  One of her amazing projects includes organizing “body-positive wrestling events,” and as a writer and blogger, she challenged Dan Savage to a wrestling match (I’d like to see him try).  She’s also a musician, artist, and video maker and is one of the co-creators of the “Shit Cis People Say to Trans People” video which has garnered more than 45,000 hits!  One nominator sums her up as “Tireless, fierce and oh so fancy,” which certainly sound like the qualities of a queen to me.
.

According to one nominator, when Courtney Fruit Fly Nichols was born, “her mother squirted glitter afterbirth.”  Though I was unfortunately unable to fact-check this bit of trivia, it’s clear from many a nomination that this lady is, in a word, “fabulous.”  (A word I do not use lightly.)  Described as “the delightful raconteur behind Fruitflylife.com” (bonus points for having friends that use words like “raconteur”), Ms. Nichols is a “cutting-edge culture queen” who brightens up our community with reporting on music, art, fashion, and film, and most importantly, hopes to change the world by celebrating difference in all its forms.  She is described as having “hair as big as her hips” (which I was able to verify via photographic evidence) and is alleged to be a frequenter of the word “thus.”  Thus, I am in agreement that, in the words of one nominator, Courtney is “the most perfect fruit fly queen for the most perfect Hard French king.”  Aren’t you?
.

According to the experts, Jackie O has the moves.  One nominator even went so far as to say, “She makes me want to be a better dancer.”  She’s a regular at Hard French, and more than one person talks about how she stole their hearts: “This saucy, sassy sexpot danced her heart out and mine. She’s force on the dance floor and a charmer on the bar stool.”  My my!  Not to mention, she’s “cute,” “quirky,” and according to one, “Nobody has a better poodle cut. Nobody.” Agreed.  And guess what?  She doesn’t just work it on the floor, but she’s also “a hard working student hustling to become an environmental law attorney.”  But the best line comes from her “SFBF” (don’t ask me, but I like it!) who says she’s the “damn-queerest straight girl a girl-boy or boy-girl could meet,” and quotes fucking Fried Green Tomatoes: “she’s my best friend, and I luvvvvah.”  You too can show her some luv by electing her your ka-ween!
. 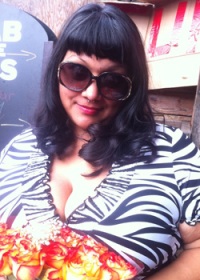 Two words: “brains and babe-liness.”  Amen, sweetie.  The consensus is that Luette is “tough, sassy, and still manages to be super sweet,” that she’s “fierce and fine and means business,” and to spell it out even further, Luette “is the hard femme, hard working student who deserves a little hard cheering for being such a good kid, friend, and lover.”  Also an herbalist, “Luette makes potions that help heal the community,” or in other words, “this metaphysical babe’s spells for days to put you in a sex crazed daze!”  I’ll have what she’s having!  In addition to brains, beauty, and brawn, Luette is known to “dance like she’s always on fire, and she spits witticisms faster than you can say ‘wha-?’” What?!  One nominator summed her up as “the bestest, politically sharpest queer-femme revolutionare,” and added, “with Luette as queen we get one step closer to The Revolution.”  Indeed.  Vive la Revolucion!  Vive Luette!
.
. 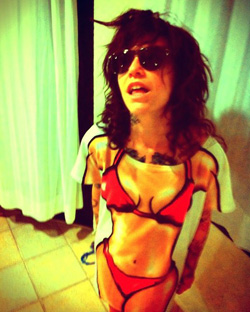 You guys!  If you don’t know who Michelle Tea is, you should probably hit the stacks, stat!  In addition to being “a staple in the queer literary canon,” Michelle is also an “advocate for the literary arts” who runs RADAR Productions and Sister Spit and is basically always reading something amazing somewhere around town.  And, according to one nominator, “Michelle has sat through more queer art than anyone else in the world. And so much of it was bad” – no one’s naming names! – “but still Michelle has the optimism and belief in her gay arts community to keep coming back and nurturing and supporting queer artists and writers – for almost 20 years!”  Wow!  In addition, she’s also described as a “trend-setter, fashionista, and friend to many,” and as having “style, grace, and poise” – certainly all befitting of a queen, eh?  And, as one person writes, “Michelle already rules so this crown is merely a formality.”  Oh the wordplay!
.

Phew!  Right?  See how special they are?  And, I’m not just being nice and Free To Be You and Me about it when I say that I think they’re all winners.  But, as we all know from Tonya Harding’s mom in the made-for-TV movie, “second is only the first to lose.”  So if you haven’t already, buy your tickets now so you can do your civic duty and VOTE!